What's Merdeka means to you?

Almost one decade into the new century & we're still talking about the same old story about bridging the gap between the races. Funny thing is unity seems to be only discussed during this time of the year. It's like reflecting on your love relationship with your loved ones only on Valentine Day. Reflection, should be done on daily basis & not only once a year. Making me wondering are we really that fragile that we need constant reminders about keeping united with one another. Or this is just the hype played up by the attention seeker politicians? Policymakers & those up there should be talking about the how to improve ourselves in the competitive economy etc as one nation instead of telling us to be "mindful" of way we talk, tolerance etc.

Felt sorry for those racial bigots, do continue doing with whatever ur currently doing with whatever intentions ur having. Ultimately, ur to answer to Him at the end of the day when ur time is up. God fearing Muslims call it "balasan", Buddhists call it "karma". What's up with people like me?? I'll just wait to put my opinion into ballot box in the next election meanwhile being thankful to Him for giving me the great multi racial friends. Grateful for them to recommend me the good food sold in the Ramadhan bazaar in town. Grateful for them to teach me the proper etiquette on how to eat banana leaf rice. Grateful for them to teach me how to curse in their native language.

Attended the 1st friendly match between Manchester United & Malaysian national team recently. Went thru massive traffic jam in Kesas highway before reaching the stadium. Reached the stadium bout 1 hour before the match to see crowd in red & only in red all over the places.
Went straight into the stadium in order to get good seat & the Malaysian team was warming up then. Apparently, this is the Malaysian Under 23 team in disguise with addition of 4 senior overaged players. Frankly speaking, everyone thought this is will be a walk in the park for the Devils. Deep inside, I just hope the young Tigers team can play their heart out, giving the Devils a good workout. Starting lineup looked impressive with almost all the Devils first team players in action. From Van der Sar till Rooney, they really looked imposing. By the 30th minute, Devils is 2-0 up with goals from Rooney (I thought it was offside!!!) & Nani. And then the unexpected magical moment came, out of nowhere Amri Yahya nodded down a goal kick from the keeper & send a 35 yarder half volley, crashing the ball into MU goal. Van der Sar, being off position was totally helpless & stunned. Boy, u should look at his face reaction on the screen....truly a world class goal & causing everyone jumping for joy. (that's showed we're still Malaysians anyway)
Second half saw the Malaysian team playing with more vigour. Ben Foster was probably still getting used to the field when he miscued a backpass allowing Amri again to take opportunity to equalise the score. 2-2, something unimaginable in real life. Towards the 84th minute, I seriously thought the score will remains till Michael Owen showed his predatory instinct to slot home the winner to give the Devils a close 3-2 win. Not a bad game for the Malaysians for this match even though they eventually lost the 2nd match to MU again 2 days later. 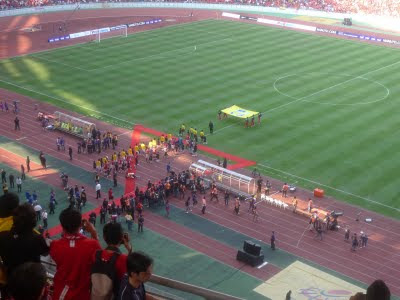 The players marching into the field 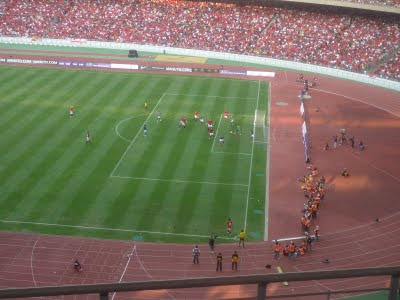 Devils on the corner. Paying more $$ could have got me better photos 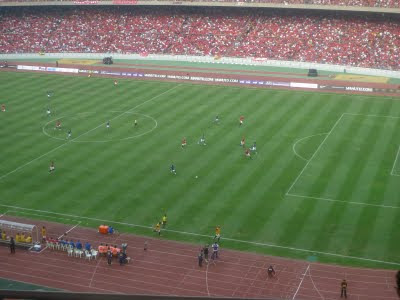 One of the counter attack forays into MU's half 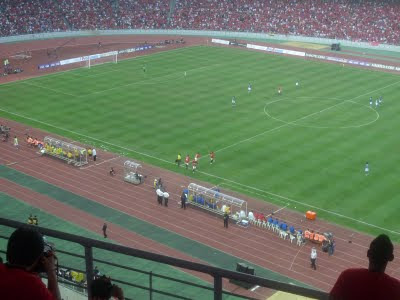 Owen & Macheda to the fore. Expect to see more of this pairing in future matches 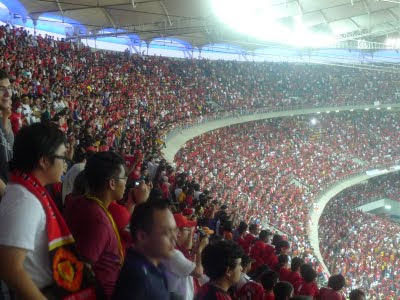