GST, or goods & service tax is one of the hotly debated topics among local politicians & economists for the past 5 years. It was made one of the mostly discussed topics during the last election. Being in a freight forwarding industry, which need me to be at the front line at the first level of the import flow (which I will explain later), I'm pretty interested in getting to know on how does it works & studying how much of impact it will have to our local economy. Will try to explain it as simple as possible, compiling information from multiple sources.

GST is a form of value added tax, or commonly known as VAT. The main purpose of VAT is to generate tax revenues to the government, similar to the corporate income tax or personal income tax. More than 160 nations in the world today practice this form of taxation. With China & other top 10 most populous nations in the world in the list as well, it's not surprising an estimated of 90% of world population live in countries with VAT or GST.

Quoting source from Wikipedia, VAT is a consumption tax, which levied on the supply of goods and services at each stage of supply chain from the supplier up to the retail stage of the distribution. In simple term, VAT is collected on the value of goods or services that have been provided each time there is a transaction (sales/purchase).

a) Sales Tax
- Introduced as a single stage consumption tax, levied, charged and paid on goods manufactured locally and imported
- Reduced rate at 5% for non-essential foodstuff and building materials
- General rate of 10%
- Levied on locally manufactured goods at the time of goods are sold or disposed of
- Levied on imported goods at the time of goods declarations
- Government collects tax at manufacturer's level only
- Element of sales tax embedded in the price paid by consumer (in simple term, hidden cost)

b) Service Tax
- Introduced as a single stage consumption tax, levied, charged and paid on specific service provided by a taxable person in Malaysia
- Flat rate of 6% (effective January 2011)
- Government collects tax when service provided to consumer
- Imposed by businesses in hospitality industry (hotels, restaurants, pubs & spas), licensed under service tax act
- Not to be confused with service charge (levied to consumers at 10% rate), which is a sort of replacement for tipping charge for the hospitality provider though not necessarily so

c) Import Duties
- Levied on goods brought into Malaysia
- Varies from 5% to 40%, depending on nature of products
- Duties determined by government using classifications of HS codes for each goods
- Element of duties paid embedded in the price paid by consumer

d) Export Duties
- Levied on goods produced for sale outside Malaysia
- Varies from 0.2% to 10%, depending on nature of products
- Duties determined by government using classifications of HS codes for each goods

e) Excise Duties
- Levied on critical / sin goods such as automobiles, liquor, beer & tobacco products
- Varies from 15% - 105%, depending on nature of products
- Duties determined by government using classifications of HS codes for each goods
- Element of duties paid embedded in the price paid by consumer

Business making taxable supplies, with annual sales turnover which has exceeded the prescribed threshold of MYR 500,000.00 are liable to be registered under Goods & Service Tax Act 2009. This includes individual, sole proprietor, company, partnership, estate & even trust, union, club, society, association or any other organization including government department of local authority which is involved in the business making taxable supplies in Malaysia. Business who are not registered under GST Act does not need to pay for GST or charge GST to the customer, but they can voluntarily register into it. Check the flow below, using the 4% rate as the model 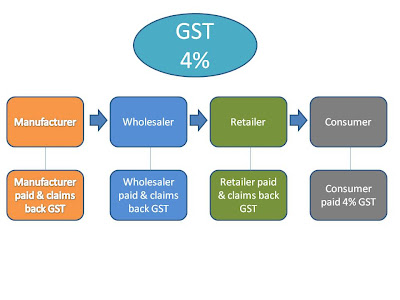 In simple understanding of the GST regime, although tax is collected throughout the supply chain, it is only the final consumer who pays for it. As explained above, the businesses may recover the tax at every stage of the value chain of a taxable product or service until it reaches the final consumer. As of today (1/10/2013) indicated in Royal Malaysian Customs website, below are industries exempted from collecting GST although Ernst & Young website showed otherwise.

However, specific supplies such as water supply & rubbish collections by state government are subjected to GST due to the commercial nature of the services. Supplies made by government statutory bodies & local authorities will also be subject to GST. Example list of statutory bodies are attached. This also means taxable supplies provided by semi-government institutions such as Tenaga Nasional, Telekom are also subject to GST.

For the accounting aspect of handling GST, registered person/company is required to submit all tax returns within stipulated period given by government between 3-6 months, depending on threshold set. All payments are to be made to Royal Malaysian Customs, acting on behalf of government. Claiming GST refunds, however is to be made within 14 working days to Royal Malaysian Customs if claim is submitted online or 28 working days if the claim is submitted manually. Refund of tax maybe offset against other unpaid GST, customs & excise duties. All business & accounting records relating to GST transactions are to be kept in Bahasa Malaysia or English for a period of 7 years.

I've attached some relevant guides for more clarifications of the above. A basic overflow of the proposed Malaysian framework of GST. Attached also is a link for getting guides for companies in different industries. As of today, the general understanding is that GST will be implemented in year 2015. We were made to understand that when it is announced, everyone will be given 18-24 months to be GST ready.

For those who don't know, Malaysia has been experiencing budget deficits since 1999. In simple terms, budget deficit means that the government spends more money than it receives. With the economy downturn happening across the region & observing the local political/economic environment, my prediction is the GST could be pushed forward to year 2014 & will be announced in Budget 2014, scheduled this October 18th. Do bear in mind, at time of this blog post, before the announcement of this bill, all information here may not be treated as 100% accurate. I'm purely sharing information with all, with the current reliable sources which I've linked all over this post and giving you all a picture of current framework (at the time of posting) & what might happens. My next post shall be on the analysis & impact to the individual, company & economy as a whole. This of course, will be depending on the announcement of Budget 2014 and shall be posted after it.